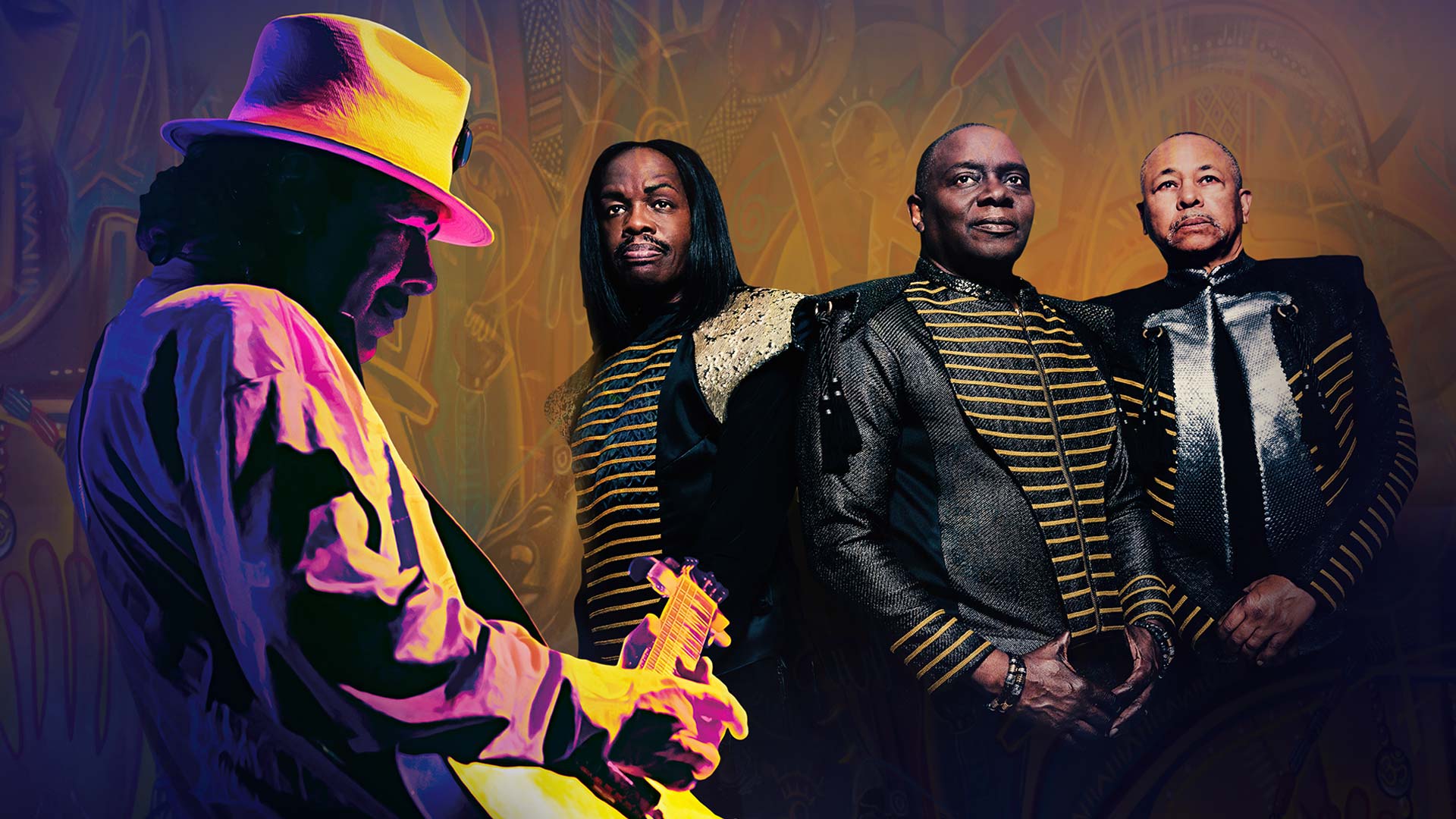 Few musicians in the history of American popular music inspire the same reverence as Carlos Santana. For more than four decades, he has been one of the music world’s most distinctive and exciting guitarists, maintaining his reputation as an artist who continues to revolutionize the form.

Long before listeners knew terms like “fusion” and “world music,” Santana was already a master who blended genres and traditions into a sound that was all his own. It’s no wonder the young guitarist generated so much excitement as a foremost member of the Bay Area’s fertile music community of the late 1960s.

With the release of his debut album Santana and an incendiary set at Woodstock in 1969, Santana established himself as one of the key artists of the era, gaining worldwide fame for his band’s combination of Latin, jazz, blues, rock, and R&B. The new star proved his staying power when Santana remained on the Billboard charts and successors Abraxas and Santana III both reached No. 1.

Santana was inducted into the Rock and Roll Hall of Fame in 1998. In addition to racking up career sales of more than 100 million records, he earned another spot in history books when Supernatural — the multiplatinum 1999 album that included such hits as “Smooth” and “Maria Maria” — won nine Grammy Awards, tying the record for most wins by a single project.

In 2014, he published his best-selling memoir, The Universal Tone: Bringing My Story to Light. Among his recent musical endeavors has been Santana IV, a thrilling album that saw him reunite with musicians from his band’s early-‘70s lineup; and Power of Peace, a deeply soulful collaboration with The Isley Brothers.

Santana, and his band (which also features Santana’s wife, Cindy Blackman Santana) highlight songs from both his Supernatural and Woodstock eras, as well as newer tracks from his 2019 full-length album Africa Speaks and some incredible surprises. Earth, Wind & Fire is one of music’s most celebrated musical forces in history with an iconic music catalogue that has been the soundtrack of millions of lives around the world.

In 2019, Santana celebrated the 20th anniversary of his revolutionary, multiple Grammy Award-wining album Supernatural, along with the 50th anniversary of his Woodstock performance. Santana’s 1999 album Supernatural featured the back-to-back No. 1 singles “Smooth” and “Maria Maria” and sold over 30 million copies worldwide, topping the charts in over a dozen countries and sweeping the 2000 Grammy Awards.

The word gets thrown around far too frequently these days, but in the case of Earth, Wind & Fire it genuinely applies: This band is legendary. From the mystical elements of their name to their profound and lasting influence on contemporary pop music to their litany of hits spanning the latter decades of the 20th century, EWF have achieved status beyond the merely mortal. Even with the passing of founder and lead vocalist Maurice White in 2016 the group live on, bringing their uplifting, body-moving blend of R&B, funk, disco, pop, and jazz to several generations of fans.

Their latest tour begins when EWF headline opening day of New Orleans Jazz & Heritage Fest in a massive party for the iconic festival’s 50th anniversary. From there, EWF travel across the U.S. and Canada, performing at amphitheaters and arenas from coast to coast and wrapping up with a pair of shows at the scenic Chateau Ste. Michelle Winery outside Seattle.

The crew is 11 members strong and includes original members Philip Bailey on vocals and percussion, Verdine White on bass and vocals, and Ralph Johnson on drums and vocals, plus a three-piece horn section and a host of young, talented players. Their stage show remains potent, featuring sophisticated group choreography, stunning instrumental interplay, and eye-popping visuals. You very well might not sit down.

The Earth, Wind & Fire story begins with Maurice White. As a kid growing up in Memphis in the 1950s, White went to school with a young Booker T. Jones, and the two began performing their first tunes together. White moved to Chicago for college and fell in with an Afrocentric artistic crowd, playing as a session drummer for Chess Records and performing at the South Side’s Afro-Arts Theater with a funk group called The Pharaohs.

His musical ambitions took him to Los Angeles, where he put together a band that included his brother Verdine on bass plus a few more Chicago transplants as well as local phenoms. Earth, Wind & Fire began releasing acclaimed albums from the start, but it wasn’t until the mid-’70s that they charted their first hits, No. 1s like “Shining Star,” “Getaway,” and “September.”

Over the years, they’ve won four Grammys out of 12 nominations, including a 2016 Lifetime Achievement Award, and the band’s lineup has changed but their sound has never wavered. After five decades of soulful music, Earth, Wind & Fire’s message of peace, unity, and celebration is now more necessary than ever.

Earth, Wind & Fire is one of music’s most celebrated musical forces in history with an iconic music catalogue that has been the soundtrack of millions of lives around the world. They were the first African American R&B group to receive the prestigious Kennedy Center Honor in 2019. Philip Bailey, Verdine White and Ralph Johnson continue the legacy of the band with career achievements that include nine Grammys, one being a Grammy Lifetime Achievement Award, and they were inducted into the Rock and Roll Hall of Fame in 2016. EWF’s music catalogue of singles and albums have tallied hundreds of millions of streams and sales worldwide and forever changed the history of music.