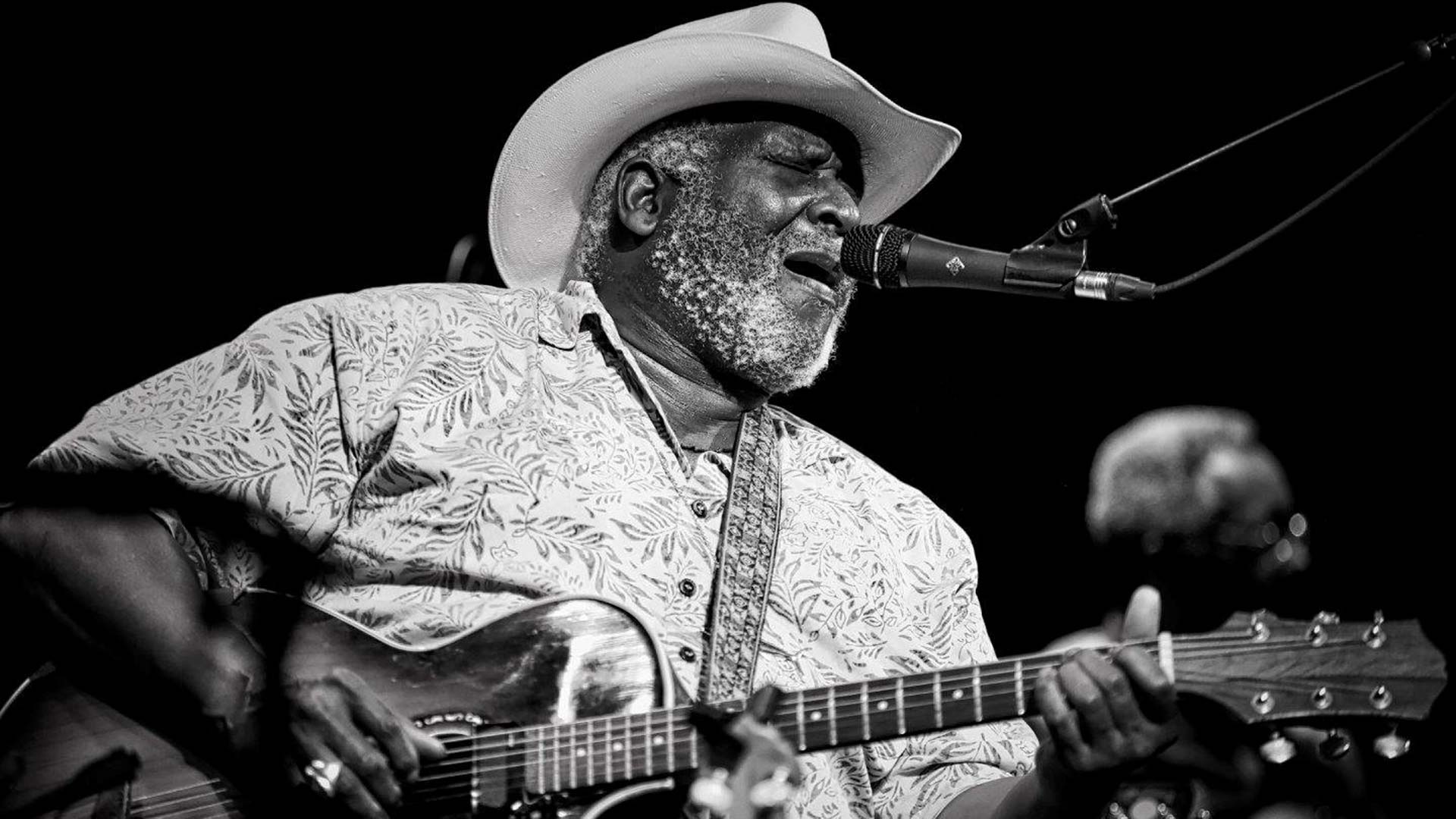 Taj Mahal doesn’t wait for permission. If a sound intrigues him, he sets out to make it. If origins mystify him, he moves to trace them. If rules get in his way, he unapologetically breaks them. To Taj, convention means nothing, but traditions are holy. He has pushed music and culture forward, all while looking lovingly back.

“I just want to be able to make the music that I’m hearing come to me––and that’s what I did,” Taj says. The 76-year-old is home in Berkeley, reflecting on six decades of music making. “When I say, ‘I did,’ I’m not coming from the ego. The music comes from somewhere. You’re just the conduit it comes through. You’re there to receive the gift.”

Taj is a towering musical figure––a legend who transcended the blues not by leaving them behind, but by revealing their magnificent scope to the world. “The blues is bigger than most people think,” he says. “You could hear Mozart play the blues. It might be more like a lament. It might be more melancholy. But I’m going to tell you: the blues is in there.”

If anyone knows where to find the blues, it’s Taj. A brilliant artist with a musicologist’s mind, he has pursued and elevated the roots of beloved sounds with boundless devotion and skill. Then, as he traced origins to the American South, the Caribbean, Africa, and elsewhere, he created entirely new sounds, over and over again. As a result, he’s not only a god to rock-and-roll icons such as Eric Clapton and the Rolling Stones, but also a hero to ambitious artists toiling in obscurity who are determined to combine sounds that have heretofore been ostracized from one another. No one is as simultaneously traditional and avant-garde.

Quantifying Taj’s significance is impossible, but people try anyway. A 2017 Grammy win for TajMo, his collaboration with Keb’ Mo’, brought his Grammy tally to three wins and 14 nominations, and underscored his undiminished relevance more than 50 years after his solo debut. Blues Hall of Fame membership, a Lifetime Achievement Award from the Americana Music Association, and other honors punctuate his résumé. He appreciates the accolades, but his motivation lies elsewhere. “It’s not a hunger, not a lust or even a thirst,” Taj says of what drives him. “It’s just more knowledge of self––to realize that almost everything is right here. We’re so used to looking outside of ourselves for things, and it’s right here.”

Taj’s exploration of music began as an exploration of self. He was born in 1942 in Harlem to musical parents––his father was a jazz pianist with Caribbean roots; mother was a gospel-singing schoolteacher from South Carolina––who cultivated an appreciation for both personal history and the arts in their son. “I was raised really conscious of my African roots,” Taj says. “So I was trying to find out: where does what we do here connect to what we left there?” In the early 1950s, his family moved to Springfield, Massachusetts––a microcosmic melting pot for immigrants from across the globe: the Caribbean, the American South, Europe, the Mediterranean, Syria, Lebanon. “Music was everywhere,” he says. “Things were different in those days. There weren’t a lot of places that African Americans had to go out to entertain themselves. So people did a lot of entertaining in their homes. Friday or Saturday night, you’d move the furniture, mop and wax the floor, and set things up so people could pop over and hear all the music.

From the beginning, Taj found the blues magnetic, even as most artists around him in the Northeast were exploring other sounds. “I could hear little strains of the blues coming through––you could feel that energy in the music that was being played,” he says. “I could also feel that energy of the blues inside myself.” Piano lessons didn’t stick––“I’d already heard what I wanted to play”––so when a blues guitarist from North Carolina moved in next door, Taj found an early mentor and was off.

For college, Taj attended the University of Massachusetts Amherst. He graduated after studying agriculture and animal husbandry. “I knew I’d like to connect myself to something on this planet that’s meaningful,” he says. “That’s why I was interested in agriculture and music. Those were the two things that I recognized even as a very young child that people are never going to do without.”

In 1964, Taj packed up and headed west. In Los Angeles, he formed six-piece the Rising Sons with Ry Cooder. The group opened for Otis Redding, the Temptations, Martha and the Vandellas, and recorded an album, but it wasn’t released until about 30 years later. “I guess that’s when they decided, ‘Whoa. I guess this guy is real,’” Taj says, with a hint of a smirk. He’s referring to record executives––a breed for whom he has little patience. “For me, playing the old music was a refuge from all the stupid stuff that was going on,” he says, pausing for a moment to point out commercialization’s limiting effects on what was both recorded and heard.

In 1967, Taj’s self-titled debut announced the arrival of bold young bluesman. The following year ushered in two milestones: sophomore album The Natch’l Blues dropped, and Taj performed in The Rolling Stones Rock and Roll Circus, a film featuring performances from the Stones, The Who, Marianne Faithfull, and others meant for the BBC but pulled and kept from public eyes until 1996. In 1969, full of music and only just beginning, Taj released Giant Step / De Ole Folks at Home, a massive double album that hinted at Taj’s refusal to be boxed in.

The 70s were a productive and ambitious recording period for Taj that included the Grammy-nominated soundtrack for the film Sounder. He began experimenting with global fusions and flirtations, signaling to listeners his restless intention to discover both new and old and disregard commercially imposed boundaries. In the 80s, Taj moved to Hawaii, and fell in love with sounds native to the island as he toured constantly, internationally. His gritty blues began to incorporate Latin, reggae, Caribbean, calypso, cajun, jazz, and more, all layered over a distinctly Afrocentric roots base he’d been raised to rediscover.

For Taj, the 90s were incredibly prolific. Back-to-back Grammy wins for the Best Contemporary Blues Album recognized two dynamic projects with the Phantom Blues Band: Señor Blues and Shoutin’ in Key. “I noticed that when it came to complicated pieces of blues music, they’d never get played,” Taj says. “It’s one of the reasons we put Señor Blues out––to say, ‘You guys, you know there is more that just the same old [imitates a beat] di da di di di da.’ It’s good when you believe it when you’re playing it. But just to play it as a cliche? That’s real boring. And real tiring.” Collaborations with Hawaiian, African, Indian, and other musicians helped define his decade.

Over the years, Taj had also emerged as a mind-boggling, multifaceted player. In addition to the guitar, he has become proficient on about 20 different instruments––and counting. “There weren’t an awful lot of people still playing these instruments that came from my culture,” Taj explains. “Not that they didn’t before, but nobody was playing them in the time I was. But I wanted to hear them. So I watched people play, got one, sat down, remembered the music that I was listening to, and started picking it out on the mandolin or banjo or 12-string.”

Taj didn’t slow down as he entered the 21st century. Maestro, marking the 40th anniversary of his recording career and featuring a global mix of voices ranging from Angelique Kidjo to Los Lobos to Ziggy Marley to Ben Harper, dropped in 2008. Last year, his highly anticipated collaboration with Keb’ Mo’––TajMo––netted Taj his third Grammy. Several projects are currently in the works, as Taj remains excited by fresh young voices trying new things and exhumed treasures that have been buried too long.

As Taj thinks about the dozens and dozens of albums, collaborations, live experiences, and captured sounds, he finds satisfaction in one main idea. “As long as I’m never sitting here, saying to myself, ‘You know? You had an idea 50 years ago, and you didn’t follow through,’ I’m really happy,” he says. “It doesn’t even matter that other people get to hear it. It matters that I get to hear it––that I did it.”

Using traditional country blues as a starting place, Mahal perfumes the pot by mixing a spicy concoction of Afrocentric roots music, a blues gumbo kissed by reggae, Latin, R&B, Cajun, Caribbean rhythms, gospel, West African folk, jazz, calypso, and Hawaiian slack key. The savory dish he serves is both a satisfying and uplifting stew that actually transforms ‘singin’ the blues’ into something to be very happy about.