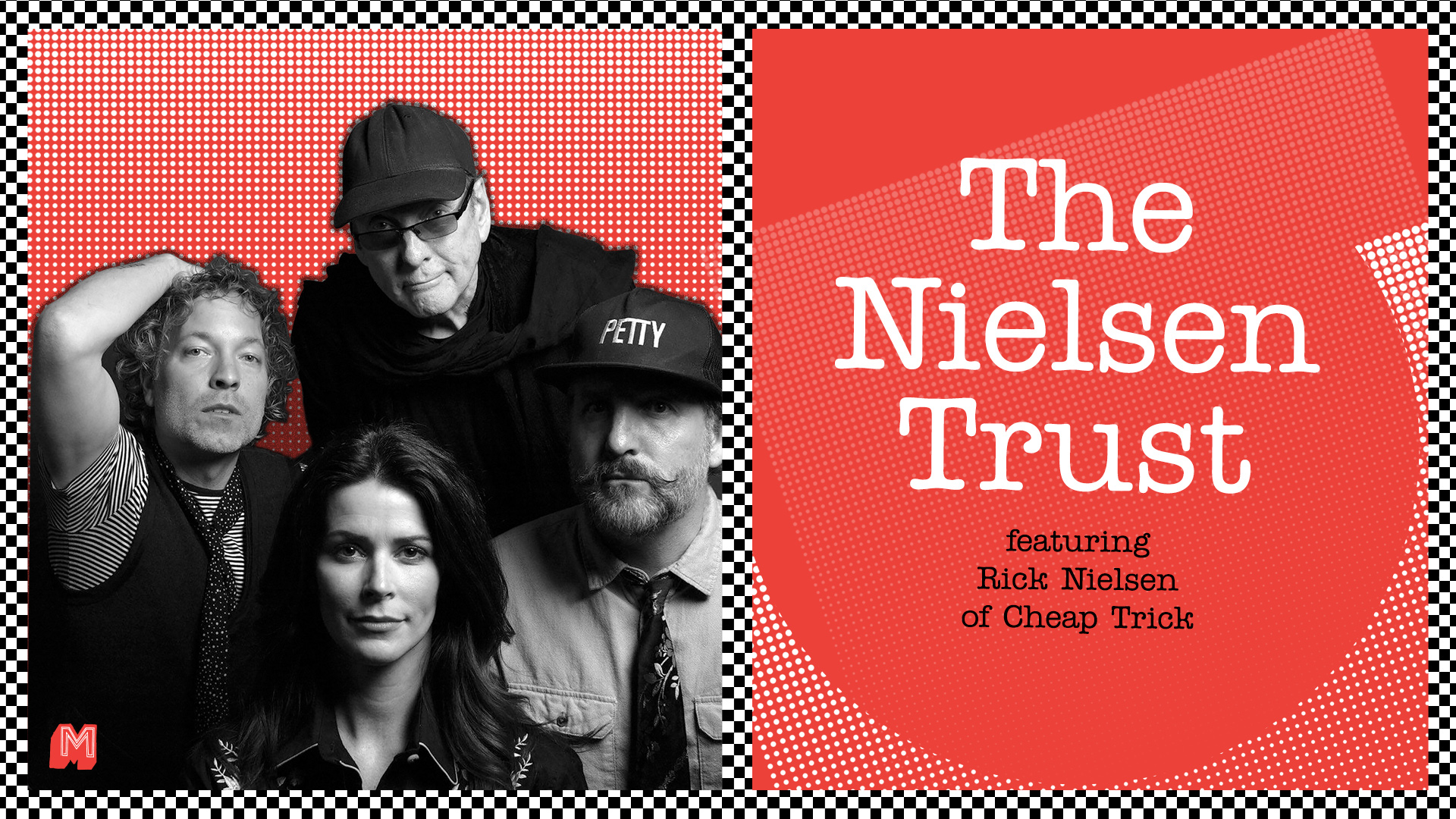 “Hey, have you heard about that rockin’ new family band, the Nielsen Trust?”

“The Nelson Trust? You mean like Ozzie and Harriet? Ricky? They’re not what I would call rockin’.”

“Rick, yes, but not Nelson, Nielsen. Rick Nielsen, y’know, the guy from Cheap Trick? He and two of his sons have formed a side band. It’s gonna be cool! Like the Griswolds on acid.”

“Wait, doesn’t Cheap Trick tour all the time? And isn’t Daxx Nielsen their drummer? And doesn’t Miles Nielsen have a band of his own? And isn’t Miles’ wife Kelly a singer and songwriter as well? How will they find the time?”

True, true, true and true. But that’s not enough to slow the hyper-musical Nielsen family. The Nielsen Trust, established 2019, connects the family’s generations – a sign of trust — for very special evenings of songs and stories from the uniquely colorful world of growing up Nielsen.
Rick promises “a Midwest musical legacy – memories, dreams and nightmares” and notes, ominously, “The Nielsens are not your warm, fuzzy and cuddly musical group. We’re not the American Osbournes.”

Or, as Miles puts it, “a way to experience music and stories between a father and his family, an intimate look at the life and songs of a family that isn’t completely f#*ked up.”

The back story: Miles and Daxx started off playing together in Harmony Riley, a Midwest quintet which released albums in 1999 and 2002. Then Daxx went off to drum for surf legend Dick Dale, Brandi Carlile and others. He got the “you are needed” call from Cheap Trick in 2010.

Big brother Miles played bass for Cory Chisel and the Wandering Sons and then launched his solo career with the Rusted Hearts. His fourth album, Ohbahoy, has just been released, and that’s not counting the EP, Weep & Willow, he and his wife Kelly Steward issued in 2016. She has a new album, Tales and Tributes of the Deserving and Not So, as well. Rick, well, he’s been playing a hundred-plus Cheap Trick shows a year all over the world, while writing and recording non-stop.

So, with characteristic Midwest industry (and the encouragement of wife and mom Karen Nielsen), the four are testing family bonds by adding another musical project to their busy lives.

With Miles out front as singer and storyteller, they’re working up lesser-known songs from Rick’s enormous Cheap Trick catalogue, adding some Miles and Kelly originals, choice covers and, who knows?, maybe writing some new tunes together. Asked for some titles, Miles says they’re thinking about such Trick tunes as “Can’t Hold On,” “Didn’t Know I Had It,” “Fan Club” and “On Top of the World.”

The goal, Miles says, is to play a dozen shows a year, accentuate the rock side (“dynamic and delicate”) more than he normally does and give the family legend a chance to play in a band that he doesn’t have to lead. Miles and Kelly will bring their three teenagers along to ensure that the binding of generations and the handing down of traditions continues for a long time to come. For the fans, the shows offer an intimate connection, an invitation to the Nielsen world, which may be rock star glamorous from the outside, but inside the checkerboard there’s a family just like yours and mine. Well, maybe not just like…

Rick once had the fretboard of a red Les Paul Jr. inlaid with the words “You know you like it.” That didn’t sound too trustworthy a sentiment. But this time, with the Nielsen Trust, you know he means it.